London is a very safe city but still it is a very big city like many others where just about anything can happen, so use common sense when visiting and use the same precautions you’d use everywhere else.

It is rather safe even for women that travel alone, but of course like everywhere else there are particular areas where, for instance, pickpocketing is more common. These areas can either be crowed and touristy area as well as area less central slightly on the outskirts.

I dont find it easy to write about this subject although I felt like the issue needed to be delivered. You can go online and check statistics, but they won’t be of great help either, they are just numbers.

I feel like talking to you all from a personal point of view, from experience.

Personally I do in London what I’d do in NYC, in Toronto, in Los Angeles...in Rome etc – just be careful without being over obsessed by what could happen or go wrong. Of course you will not walk with your wallet sticking out of a pocket, of course you will definitelly not walk into a dodgy area that screams “danger” kinda clearly. It’s common sense not rocket science. 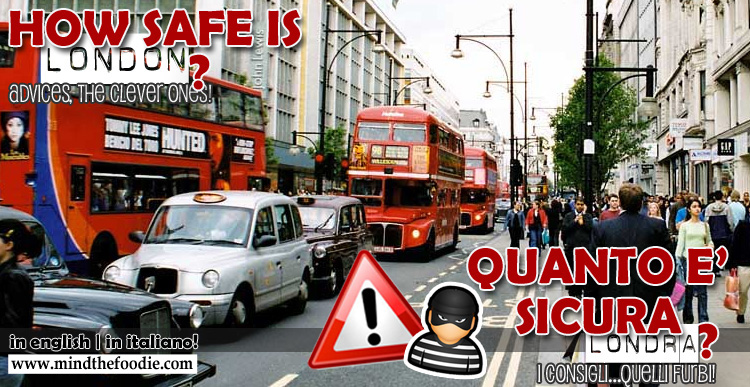 I’ve never felt unsafe in London, I’ve always chosen carefully the areas where I lived and even coming home late at night I’ve never felt like I was not safe. Never been robbed, nothing bad ever happen to me, really. And I’m actually talking about a long period of time so there was all the time and occasions in the world for bad things to happen.

Try to avoid dodgy areas, either if you are just visiting or if you live in London. You can check Metropolitan Police website just to have an idea of the so-called unsafe areas, South/East London has this reputation for being slightly more unsafe, but still this doesn’t mean that everywhere you go in South/East London you will be robbed. Of course not.

As for Terror attacks nobody can really tell what will happen and where, simply like everywhere else. Security / Police is almost everywhere patrolling landmarks that are popular for tourists, but this is happening in any other major city in the world right now, especially after the attacks that occured over the past 2-3 years, and it is natural to be afraid…. but I advice you to read my article “WE ARE NOT AFRAID“.

In London if you don’t go looking for trouble then it will not find you. On the night bus don’t sit on top deck (if the bus is not full). Sit on font seats/bottom deck near driver, just a simple advice that make you feel safer.

Don’t like a clueless tourist, pay attention to what is going on around you, have a good grip on the bag you are holding, don’t show everyone your values you are carrying on you.

Be carefull but do not be afraid.

There are millions of people that go by living their lives in London every day without a care, because even thought there are bad things that could happen, thy should not stop you from visiting this amazing city.

Don’t let these fears stop you from travelling the world, don’t let them win.