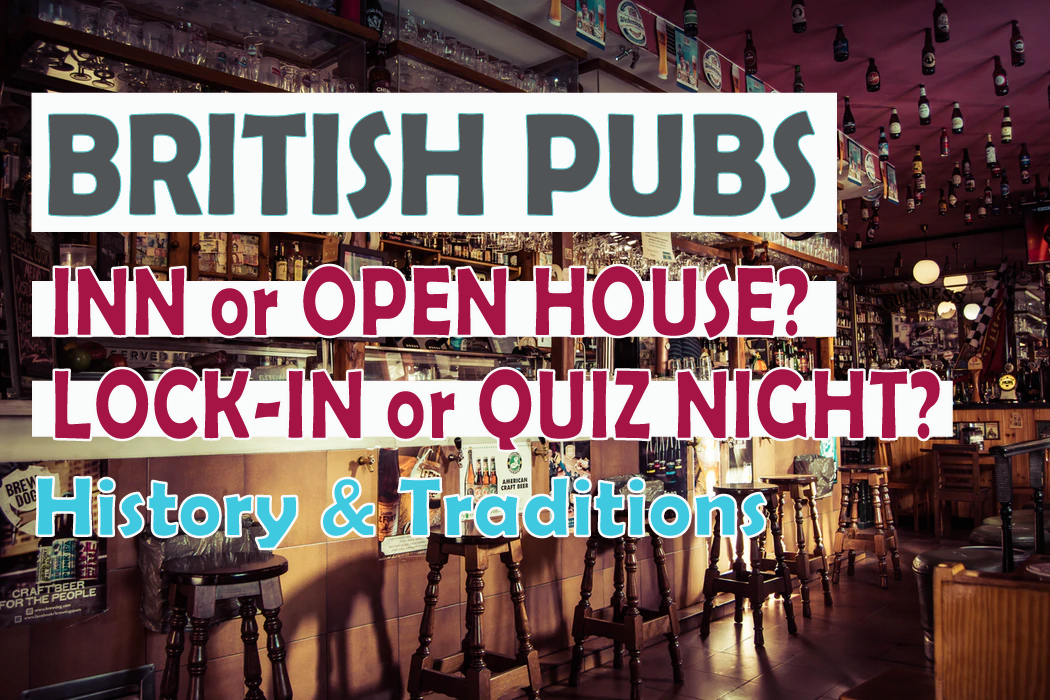 Pubs, Inn, Open Houses. What are they? You can’t possibly say “Britain” without adding soon after the word “pub”, can you? A Pub here in the UK is not just a place where you go for a beer, it is very often the focus of a whole community. If you have been to London, you have seen men in a suit standing outside a Pub after 4.30 pm having a drink. That’s what we do, very often, to let our hair down after work. If you venture out a little, outside the touristic areas, you will see local pubs with locals having a laugh while sipping a good beer.

It’s a tradition. A tradition that started over 2000 years ago! How? Let’s find it out together with a little bit of History, I promise it won’t be boring!

So, the Romans, as we all know, brought roman roads pretty much everywhere, but along with their great urban planning system, they also introduced the Tabernae back in 43 AD. These places where some kind of shops selling mainly wine, and they were mainly located along main roads.

Well, the old marketing strategy! More traffic, more visibility, higher chances to sell! They were selling ale too, which is a traditional British brew, and with time these Tabernae in the UK turned into what is known as Tavern and used to sell mainly beers, to adapt to the nation’s favorite drink.

These Taverns were very popular and managed to survive further invasions, even when King Edgar tried to limit the number of beers that could have been sold in a Tavern, they still managed to remain very popular and people loved them. By 1577 there were around 17.000 Taverns in the UK, and if we think about the population of that time, this means about 1 tavern every 180 persons.

Ale and beer have always been present, strongly, in the British culture, so much that in times where drinking water was not too safe, due to poor water pipes maintenance, drinking beer was definitively safer and easier. And more enjoyable too!

You could, at that time, step into a Tavern and order a coffee or tea, but prices  were so high that it was privilege of rich people to be able to drink coffee and tea. Gin, on the contrary, was very affordable thanks to the Dutch. They introduced very cheap Gin in the UK, and it because suddenly a very popular drink in taverns. This caused a social drinking problem, known as “the Gin Era”, in 1720-1748. This is why a Gin Act was introduced in 1736 to limit the amount of gin intake, and not just for a health reason, but also to lower the number of issues caused by drunks in Pubs.

Living in London can be still pretty expensive, I have an article where you can see how much it costs to live here!

Surely you have noticed that some Pubs are still called “Inn” and some “Open House”. What is this? What’s the difference?

Inns provided food, drink, and accommodation. They were also used as military recruitment centers since it was the main place where men used to gather late in the afternoon. That’s also why, nowadays, we have small hotels called Inn, Holiday Inn for instance. Because the word Inn means you can rent a room for the night in that publish establishment.

An Open House is a Pub, with no accommodation option, and the term “open house” comes from the fact that these places were meant to be like your home-lounge: where you can have a drink, relax and enjoy your evening. That’s why Pubs were known as Open Houses.

The word PUB, in fact, comes from PUBLIC House, did you know that? There is another interesting difference to know: free and open house. The free house is usually a Pub that is not sponsored by a specific Beer Brand, so they can sell whatever.

Alehouses, inns, and taverns collectively became known as public houses and then simply as pubs around the reign of King Henry VII. A little later, in 1552, an Act was passed that required owners to have a license in order to run a pub.

License wise, many Laws have been introduced and changed over the years, till 2005 when the Licensing Act was introduced. This allowed pubs in England and Wales to apply to the local council for the opening hours of their choice. This means that a Pub owner can have the Pub open after 11 pm, but one interesting thing still exists: the Lock-in tradition.

What is this? Well, before the introduction of the Licencing Act, Pub had to close the door at a specific time and no more alcohol could have been sold after that. The locals were not quite happy about this Law, so many pub owners started to close the doors at the agreed time, but whoever wanted to stay longer could do so, but doors were closed and the money was given to the owner before closing time. Technically no drinks were sold after closing time. Smart. Nowadays there is no need for a “lock-in” because the pub can stay open and sell alcohol after 11 pm, but the Lock-In tradition remains, especially in pubs in residential areas and villages.

If you are visiting London, or if you have just moved here, one of the nicest things you can do is going into a Pub on a Quiz Night!

Usually held on weekdays, they are just another excuse to have a drink and a good laugh. It is a very British thing to do and the quiz questions are often based on British Culture. But don’t let this scare you away, it is so much fun and a great way to get to know the place and feel at home!